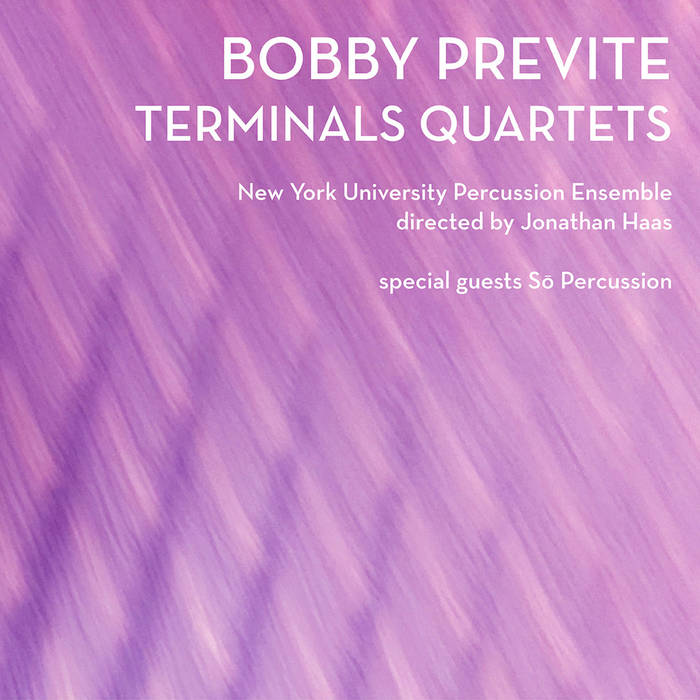 Performed by the NYU Percussion Ensemble under the direction of Jonathan Haas with guest appearances by So Percussion, Bobby Previte’s new work Terminals Quartets celebrates the subtle, the powerful and the serene in modern percussion-based music.

The piece is both a back story and a natural progression for Previte’s 2014 Cantaloupe release TERMINALS (Five Concertos for Percussion and Soloist). In that work, So Percussion played the role of a concerto orchestra behind soloists on harp, guitar, piano and saxophone; Terminals Quartets re-calibrates exclusively for percussion, and adds new music to create a work of vast space and melodic abstraction—an entirely new entity of percussive sound, with an eerie echo of its original source.

As such, Terminals Quartets is also testament to the teaching power of music, with the recording having been beautifully captured by Paul Geluso in New York University’s James Dolan Studio, and featuring top percussion students from NYU’s premiere Steinhardt Music and Performing Arts Program.

Cantaloupe Music is the record label created by the three founders of New York's legendary Bang on a Can organization—composers Michael Gordon, David Lang and Julia Wolfe—with Bang on a Can managing director Kenny Savelson. Cantaloupe Music has made a massive impact in the contemporary music community, and has been recognized by critics and fans worldwide for its edgy and adventurous sounds. ... more

Bandcamp Daily  your guide to the world of Bandcamp

Featuring Gary Bartz, 5 years of Rhythm Section Intl and an LP of the week by Nicolas Jaar